When you think of March Madness, the first few things that pop into your head are likely college basketball, buzzer beaters, and obviously the Backstreet Boys.

Apparently, when Kevin, AJ, Howie, Nick, and Brian aren’t busting a move they’re making March Madness Final Four picks for Caesars Sportsbook. In this promo dubbed Back Backstreet, the Boys each pick the teams that they think will make the Final Four, and it was turned into a four-team parlay.

With odds ranging from +2500 to +45000, the picks from the world-famous boyband members include a wide range of options. Kevin’s parlay has the shortest odds (+2500) as he has two one seeds in Gonzaga and Kansas, along with second-seeded Villanova and fourth-seeded UCLA.

On the other end of the spectrum is Kevin’s cousin, Brian, who has a parlay with +45000 odds. He went with three longshots, including the longest of longshots — the 15-seed Saint Peter’s Peacocks. By combining them with Duke, Michigan, and Miami, you can get 450-to-1 odds and hope the Cinderella story continues into the Final Four. 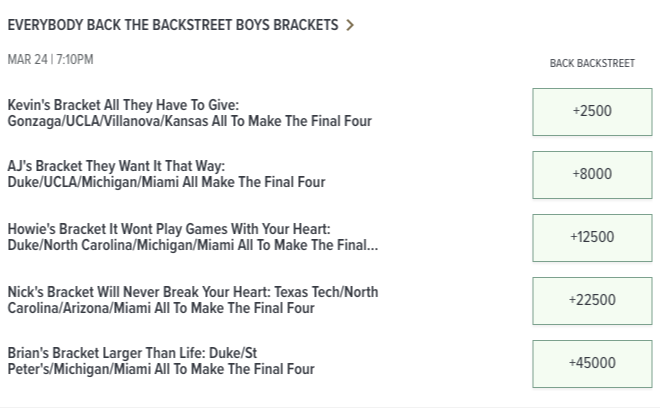 The Boys “want it that way” and you have the chance to tail them while potentially making some money in the process. If their Final Four picks are anything like their greatest hits, then “Everybody” should come out a winner.

Get Risk-Free Bets on The Final Four Tonight

Sign up for Caesars Sportsbook with promo code USODDSCZR. Place a first-time wager of up to $1,100, get it back in the form of a Free Bet, if you lose.

Player props in the national championship game can be a tough nut to crack. This is typically the case because...

You might be thinking of taking an under or two when it comes to North Carolina Tar Heels player props...

After pulling out an emotional upset victory over archrival Duke in the Final Four, the North Carolina Tar Heels face...

How to Bet on the Final Four

When the NCAA Tournament gets trimmed down to four teams, it's called the Final Four. With each region’s champion having...

Terms and Conditions 21+ only. New users with eligible promo code only. Bet amount of qualifying wager returned only if wager is settled as a loss. Paid as a single bet credit. Maximum bet credit $1,500. Bet credit must be used within 14 days of receipt. Void where prohibited. Gambling Problem? If you or someone you know has a gambling problem, crisis counseling and referral services can be accessed by calling 1-800-GAMBLER (1-800-426-2537).
No Result
View All Result